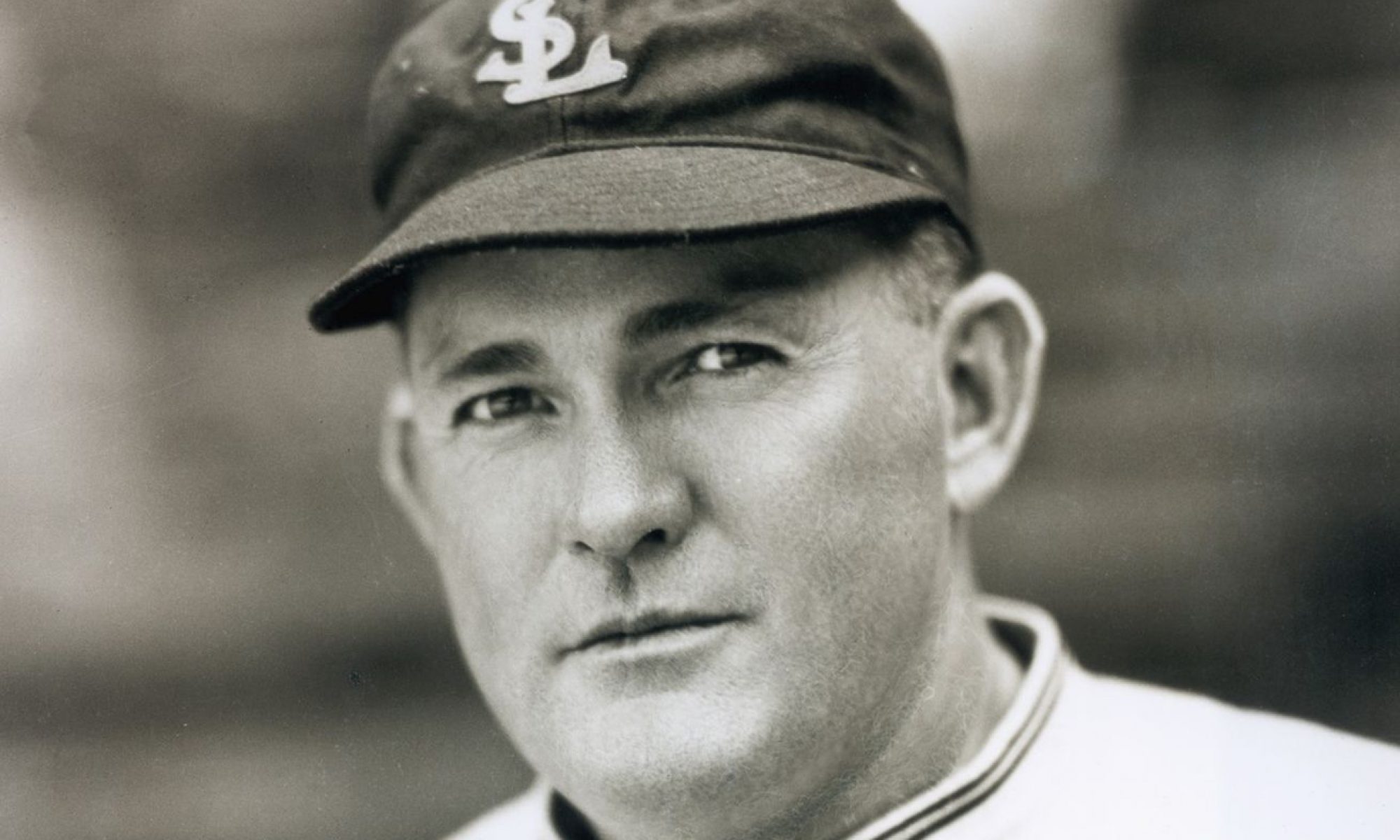 Rogers Hornsby was born in the small town of Winters, Texas on April 27, 1896. His unusual first name originated from his mother’s maiden name. Very little is known about Rogers’ childhood, but an isolated life in a small town like Winters undoubtedly played a role in his stern demeanor. Like most children his age he grew up playing baseball, but his talents were not apparent as early in life as many big league stars.

He debuted professionally as an under-sized, erratic-fielding, light-hitting shortstop in the Texas-Oklahoma league at age 18. His contract was owned by the St. Louis Cardinals, who tried to sell it to Little Rock of the Southern League for $500. Little Rock saw little potential in Hornsby, who batted .232 at the time, and turned down the offer. So the St. Louis team faced a choice: either release the young man or try to re-build his swing.

Luckily, the Cardinals chose the latter. Coaches like Cardinals manager Miller Huggins helped straighten the young man’s stance and refine his swing. He was called up to the big club at the end of the 1915 season, and in limited playing time, Rogers hit a meager .246. In the winter following his first taste of the big leagues, young Rogers decided he needed to bulk up if he was going to have any hope of a professional career. He spent the entire winter enduring extremely difficult labor on his uncle’s farm.

The hard work on the farm paid huge dividends. In 1916 he entered spring training with 25 extra pounds of muscle, a much heavier bat and a spot in the Cardinals’ lineup. Even though he bounced around at all four infield positions, he hit a very respectable .313, making his first full season a sizeable success.

The following year, Hornsby’s talents soared as he led the league in triples, slugging percentage and total bases, and finished in the top-10 in six other major offensive categories (including second in the batting title to Edd Roush). His career seemed to be on a fast-track to stardom.

1918 was a frustrating sophomore full-season for Hornsby. Once again he was the starting shortstop for the Cardinals, and he improved his fielding so much that he led the league in double-plays. However, his average dipped to a career-low .281. That would be the last time Rogers would let his average slip below .300 as a regular.

He rebounded nicely in 1919, finishing second in the league in batting average, hits and RBI. It was very apparent that if he continued to produce at the same pace of his first few seasons, he would be one of the best players out there.

As the “Roaring 20s” opened, Rogers separated himself as one of the best right-handed hitters in baseball. He ended the 1920 season like he would end the next five seasons — by winning the National League batting title. He also led the league in on-base percentage, slugging percentage, hits, doubles, total bases and RBI.

The 1921 season was even more incredible. He fell two hits short of the elusive .400 batting average and two homeruns short of the National League Triple Crown. Despite those “shortcomings,” he put together one of the most brilliant seasons in history. His .397 was 45 points better than second-place Edd Roush for the batting title. He also led the league in on-base percentage, slugging percentage, hits, runs, doubles, triples and RBI.

In 1922 “The Rajah” showcased the most dominant season at the plate in the history of baseball. He demolished National League pitching and exceeded his unbelievable hitting performance from the previous season. He finally eclipsed the .400 mark, leading the league by nearly 50 points over the second-place finisher Ray Grimes. Rogers also crushed a surprising 42 home runs — twice as many as runner-up Cy Williams. To complete the Triple Crown, he knocked in an astonishing 152 RBI. Amazingly, Rogers did not win the 1922 MVP award. (It went to George Sisler, who .420 and swiped 51 bases.)

Roger set the bar so high for himself in 1922 that the following season seemed like an “off” year for him at the plate. He led the league once again in batting average, on-base percentage and slugging percentage, but an injury limited him to only 107 games.

Rogers was determined to get back to form during the 1924 season. His determination led to one of the most amazing feats in baseball history. He hit .424 — the highest batting average by a player in the 20th century. He also led the league in on-base percentage, slugging percentage, runs, hits, total bases, doubles and finished second in home runs. However, the best was yet to come.

In 1925 he somehow topped his unprecedented 1924 season. The legendary baseball pioneer Branch Rickey, who managed the team since 1919, was dismissed after frequent disagreements with Cardinals owner Sam Breadon. Breadon then asked Hornsby to take over as the Redbirds’ manager. His perfectionist style on the playing field started to rub off on his players. The Cardinals finished in fourth place with Roger at the helm. More importantly, he won his second Triple Crown, nearly matching his statistics from his first unforgettable Crown season in 1922. This time, however, he would win the Most Valuable Player award. He hit .403 with 39 long balls and 143 RBI. This would be the last season “The Rajah” would reach the .400 mark.

Roger’s 1926 campaign proved to be an emotional year for the reigning MVP. He was retained as manager of the team, but the added pressure of being the manager from the onset of the season took a toll on his hitting. His batting average dipped nearly 100 points from the previous year and he hit fewer than a third of the previous season’s home run output. But most importantly, discrepancies with Sam Breadon began boiling over.

Despite all of the adversity, he skippered the Cardinals to one of the biggest upsets in World Series history, defeating Babe Ruth, Lou Gehrig and the rest of Yankees in seven great games. However, Rogers’ extreme personality finally got the best of him. Rogers was very vocal about Breadon’s frugality throughout the season and demanded a new three-year contract worth $50,000 a year after the Cardinals’ first ever World Championship. Incensed with the demands, Breadon traded the superstar to the New York Giants for Frankie Frisch and Jimmy Ring, much to the dismay of Cardinal fans. This would not be the last time Rogers’ unwavering personality would get in the way.

After the trade to the Giants in 1927, Rogers continued to be one of the most dominant hitters in baseball. He played second base for the Giants and even filled in for 33 games as manager. He dominated National League pitching – once again among the league leaders in hitting with a .361 batting average, 26 home runs and 125 RBI. Unfortunately, personality conflicts with manager John McGraw lead to another trade after only one year, sending Rogers to the hapless Boston Braves.

The 1928 Braves were one of the worst teams in baseball and Rogers was the lone bright spot. He was named manager early in the season, but his team less than a third of their games, finished in seventh place and were 44.5 games behind the pennant winning Cardinals. Rogers won his final National League batting title that season with a .387 batting average. However, at the season’s end he was traded for his third time in as many years. This time Rogers was picked up by the Chicago Cubs, who shelled-out five players and $200,000.

The Cubs seemed like a great fit for Rogers. They were an experienced team on the rise with stars like Hack Wilson and Kiki Cuyler. Rogers delivered with one of the best years of his career. He won his second MVP award and narrowly missed a Triple Crown by finishing third in batting average, home runs and RBI. The Cubs advanced to play the surprising Philadelphia Athletics in the World Series. Unfortunately, they lost to the A’s in five games. Subsequently, it was “The Rajah’s” last full season in the big leagues.

The Downfall of “The Rajah”

After all of his great seasons, Rogers Hornsby finally began to slow down. He was named manager of the Chicago Cubs late in his second season with the team in 1930. He continued to serve a role as both player and manager during the 1931 season, where he pulled together a solid .331 batting average in limited duty. Then in 1932, at the age of 36, he appeared in only 19 games as a player. After 99 games he was replaced as manager by Charlie Grimm. The Cubs went on to win the National League pennant, and despite their success, they did not share a cut of the World Series pool with Rogers.

Rogers signed on for a brief 46-game stint with his beloved Cardinals before becoming a player/manager for the cross-town Browns. He managed the woeful Browns for the next three and a half seasons to no better than a sixth place finish in 1934. In 1937 Rogers completed his final year as a player. He resurfaced as a minor league manager throughout the late 1930s and 1940s. In 1952 he was hired as manager for the St. Louis Browns, then moved mid-season to the Cincinnati Reds. He lasted one more year as manager of the Reds before he left baseball for good in 1953.

Rogers Hornsby died of a heart attack during cataract surgery in Chicago on January 5, 1963. He is buried in the Hornsby Bend Family Cemetary in Travis County, Texas.